Is taking your husband’s last name a good idea? Should you keep your maiden name? Does a name affect your sense of self-worth and how you interact with your money and assets? Join me – financial feminist and money coach, Kelly Harrell – to go much, much deeper on this very controversial topic.

Today, I’m kicking off a brand new series, of five to ten minute videos, which will be exploring all the subtle ways in which women often feel disempowered around their self-worth, and their experience and success with money.

My hope is through this series, I will inspire you to do your own investigations, help you to make more conscious decisions around your choices and to help you increase your success and financial wellbeing.

So let’s get started.

Today, I’m going to dive in on something that is surprising to me for my very first topic and also something that can be a controversial topic. And that is – “If you marry a man, do you take his last name or not?”

Now, if you’re not married and not considering getting married, still stick with me because it’s important for you to understand how other women may be being affected by this because when their boat is at a certain level it can tend to keep your boat at a certain level. So, understanding what the sea of women around you are also experiencing in very subtle ways can be empowering for you as well.

So let´s go ahead and dive in and explore the subject of taking your husband’s last name.

The history tells us that women have been pretty much expected, and even by a law were required, to take their husband’s last name – which, in effect, subsumed their identity to a man when they got married. In fact, for many years, I think it was 19… I can´t remember the year. Women were required by law to take on their husband’s last name. Now, a man, whether he was 5 years old or 75 years old could be a “Mr”. A woman until she was married was a “Ms.” and then after that became a “Mrs.”. Thus taking on and then her last name, of course, changed to her husband’s. So she became an individual — her own person — and then her identity became that as a property of her husband and her other self went away.

Can you imagine saying all this to a man? That he should take on her last name and if he doesn’t, he is not committed to the marriage. And it should be illegal if he doesn’t take on her last name. In today’s modern age, that’s a really hard thing if we stop and we look at it. That’s hard pill to swallow. That these are still expectations that are placed on women. And that we still willingly go into that.

Now, I do want to say that anyone who has chosen to do that, I am not here to ruffle up your feathers? I’m not placing judgment on you, whatsoever, if you decide taking your husband’s last name is right for you. In my first marriage, took on a hyphenated last name with my spouse. In my current marriage now, I’ve retained my original name this time around. But there is no judgment from me if you have chosen to do so. It´s just part of what the culture is. My reason for the video is to help people start questioning it and unraveling some of the things that may be impacting your subconscious and how you view yourself in the world. So please stick with me.

I’m going to cover three ways in which taking your husband’s last name can impact your sense of self-worth and even how you show up financially.

So the first one is that you’re not an individual. Because you’ve taken your husband’s last name, you are again partly, suddenly subsumed to him. And when we subsume ourselves to another, it can often have a subtle effect of saying that you are not enough; that you are not enough to stand on your own and hold your own identity as that individual – and you are, in fact, valuable simply through your relational aspect. So, Mrs. Smith, Mrs. Jones, but not who you originally were.

So most men would never really consider having themselves be identified relationally to you, the woman. So it is easier to see it when you look at it through ‘does your husband feel the same way about that kind of relational aspect of subsuming of identity’. That’s worth exploring.

So when we look at our maiden name or what I prefer to call our original last name, there are life assets that are tied to it. If you have an ethnic identity, when people see your last name they can connect with you around that rich history of ethnicity. If you marry, that ethnicity could very well be lost by taking on your spouse’s surname. So you could find yourself cutting off some of that cultural connection to your past.

A second thing is that a familial lineage, I find that people often will approach me two to four times per year asking me if I have family members and such and such, and it’s just a nice way to have a little bit of a conversation starter, but it does make me feel connected and makes me think about my ancestors each time someone approaches me about that. Who else of my blood might be out there in the world? It helps me feel connected to my life fabric.

Another one is that if you’re using your original last name, especially in social media, it makes it a lot easier for past employers, professional connections, friends, and other people that you’ve met through your past to relocate you. If you have changed your name to that of your husband’s, one or more times that popcorn trail to recover you and find you becomes lost to the wind and oftentimes becomes impossible. It can even affect, say financial institutions or other bodies, which need to be able to track where you are to locate you with time sensitive information. Taking your husband’s last name can mean some cutoff to your financial identity. So that’s the second thing – it’s your life assets.

The third way in which taking your husband’s last name can really impact a woman is through the cost to her time, energy and money resources. Now, let me explain.

When you change your last name, now if it’s through marriage or divorce it’s a little bit easier, versus if you just voluntarily change your last name. But when you do, here are the things that automatically triggers, that began to start happening, for the woman ONLY, NOT for the man. When she takes on her husband’s last name:

And in each of these times, we’re talking about you calling, spending time on the phone with somebody sending in the documents that prove the change to these institutions.

And just note that things do and will get lost along the way. As you go through this transition, think about the impacts to your time, energy and money. Zero of which men have to invest when they get married to you. Give that some thought and make a consideration if you have not yet, or if you are not currently married and considering doing so, going into the future.

Now, there are good reasons that you may want to change your last name.

One could be that he has a powerful last name, and it would economically benefit you or professionally benefit you to do so. If changing your last name to his last name would help you advance yourself in some way, then it might be a worthwhile change to make. As long as you’re conscientious of the other impacts to your own identity and sense of self-worth.

The second reason could be that you want to start a fresh chapter. Perhaps you had a painful childhood or something that you desire to deeply distance yourself from. That’s completely okay, and understandable, and in that case, yeah, you might want to go ahead and change to his last name, or better yet, create your own last name that will stick with you throughout your lifetime, that will never be tied to whether you’re married to a man or not.

So, I just wanted to say that a last name is a very subtle thing and if you have chosen to take on your spouse’s last name or feel like you would really like to do that, spend some time exploring it and just understanding it. And it’s okay if you do or not. It is not something that I am here to judge in any way, whatsoever.

My only goal with this video series is to bring to light ways in which women can be disempowering themselves around their sense of self-worth and their relationship to money. If this is not true for you at all, around a name change and this resonates with you in zero ways, cool, then you have bypassed that whole chapter. Maybe this video isn’t for you, but I do hope you’ll stay tuned with me for the next one.

Until then, be well, go build your financial success, and build those money trees by being gorgeous and exactly who you are.

Take control of your financial life! Get your free copy today. 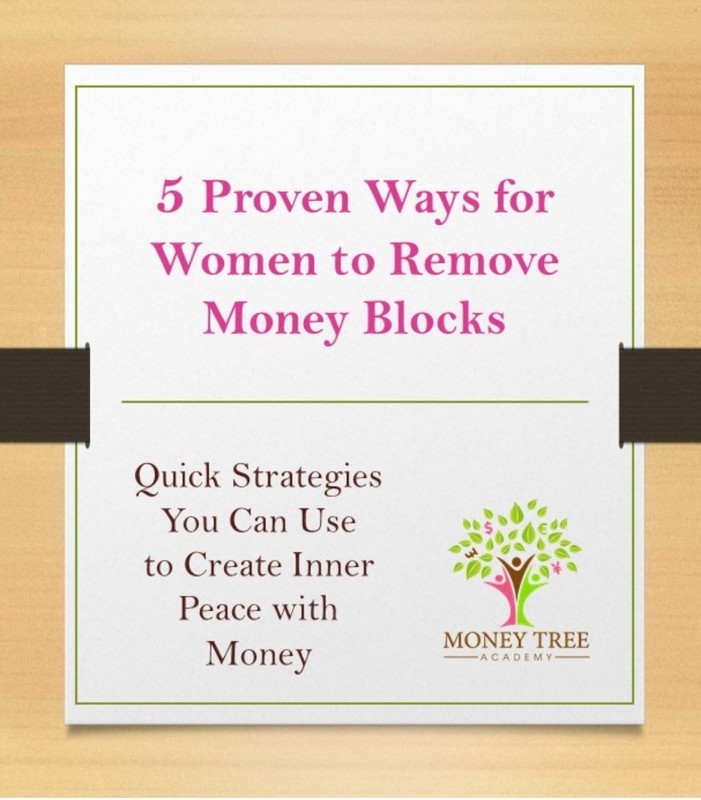 Success! Now check your email to confirm your subscription.

Your money journey begins by uncovering what’s in your subconscious. Discover what’s hidden in you HERE.